Pinch, punch first of the month.

But, hey, hasn't the year raced past?

A long day yesterday -- up at 6am and I went to bed, after collecting 'H' from work, at midnight.

And it starts again today...

I'm going to check in later and write some more, but, for now, I can report that I've got this compelling need to write more poetry and throttle back on the blogging and social media. (I know Resistance is at my heels again.)

As a segue, I do wish those people who 'use' social media would stop talking about their company offering to the exclusion of everything else. It's sooooo boring. Don't they have a life?

Things are so so at work. That's an understatement but for now, I can't share a great deal other than to say, things are not turning out as I hoped for -- I'll be charitable and say it's all my fault but I suspect you know, in part, that's not true.

It's nice to have my eldest daughter back home. She's definitely made things a bit lighter and the youngest is back to her one-joke-a-minute best -- if 'F' doesn't do stand up at some stage in her life I'll be amazed.

I'll leave you with an artist that I like a lot. He's called Noah Guthrie and mostly does covers but he has this soul that just gets to me every time I listen to his music. Enjoy.

I'm not a great fan of the platform -- it's replete with existential angst -- but once in a while, it throws up a good piece or two.

Here's something worth reading by Joe Brewer: Who is Creating the Future Nobody Wants?.

Let me know what you think. 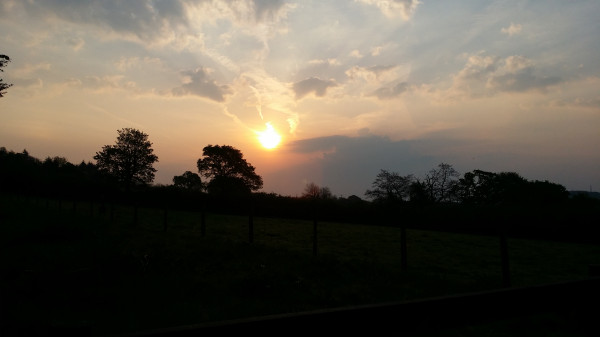 I need to heavily refine my writing and creativity schedule. It used to be much easier when I was self-employed, but with a full-time job to contend with, being a dad to three amazing girls and trying to find time for me and Alli, I find it harder and harder to carve out a space with which to write or even think about writing. At the moment, if I'm not too tired, I get up at 5am, check my emails, read a few blogs via Feedly and The Guardian online. After that I'm either writing a blog, reading or writing my morning pages. Oh, and if you throw into the mix checking LinkedIn, Tumblr, Twitter and Instagram, before I know where I am, it's time to take the dogs for a walk, before rushing to get out the house for 8am both to get to work and take my daughter to School. (I eat if I'm lucky.) The evenings, much to my consternation, are pretty rubbish. I know I could discipline myself to start writing at, say, 9pm, but I'm not sure if I'd get much done or it would be worth the investment of time. In fact, given a choice, I'd much rather exercise or read -- they're much more natural and help to settle my mind.

But none of this masks the real issue, namely I've never got past spending more than a few hours on any one piece. Let me be very clear. I'm scared of investing weeks, let alone months on any one written piece and that's why I've become addicted to blogs -- both the production (it's easy) and the near instant feedback. But I know it doesn't amount to a row of beans! Oh sure, I can delude myself into thinking I've accomplished a lot over the last six years -- and I have in the volume of words I've spewed forth -- but I've achieved precisely nothing in the writing or poetry stakes. (Actually, that's not true. I've published via Amazon one collection of blogs and a book of poetry, but that was because my then coach/mentor was at my back and I felt the need to publish something.)

Do I think I'd be any good as a writer or poet? Who knows, but I'm not going to find out hiding behind a multiplicity of posts. Please don't think that I've got this huge ambition to be a writer but, rather, for as long as I can remember, I've always been drawn to words and writing in a creative way (even as a lawyer I drew inspiration from those Judges who could write in mellifluous prose, rather than the anodyne, stilted nonsense that most lawyers tend to rely on) and the need to express one way or the other.

Going forward, I will be much more focused. And when I say focused, I mean I'll begin to wean myself off everything that doesn't contribute to my writing. That means I'll now only post one blog per week on juliansummerhayes.com, nothing to LinkedIn, only the odd piece of poetry to Tumblr (but only if I feel I need to) and everything else can wait until the weekend or even the end of the month. That means I can stop checking social media, which is not only a drain on my time but it pulls me in all sorts of nonsense directions.

How I hope my day will look going forward (fingers crossed):

Because of 'H's' racing, it's difficult to be too prescriptive, and we're moving house which will mean I'll need to declutter and pack over the coming weeks, but once we're moved and settled in, and allowing for at least one day of bike racing until the end of September, I expect to spend three-five hours writing, one-two hours writing poetry and a few hours to catch up with my reading. I know this needs to be tightened up but it'll have to do for now -- hell, I'm not a robot.

I realise there's a lot missing, not least the fact that I've not explained the nature of the book, the word count, the genre and if I'll go for the self-published model again or something more mainstream. It will definitely bear on the strap line you'll see plastered all over my social media sites -- awaken, to true self -- but I expect it to be heavily autobiographical, if only because I think there are so many things I can talk about that I hope will help others avoid the plethora of mistakes I've made, not least climbing the ladder of success only to find it leaning against the wrong wall.

I appreciate that this post is very me, me, me but I feel the need to publically share my travails so that you don't think I'm one of those personal development gurus (yuk!) who've got it all worked out.

And, yes, I'll still write here but it will be no more than a diary of sorts and to keep me on the straight and narrow.
Collapse